Interview: Chad Rook (War for the Planet of the Apes)

You know him as "The Weather Wizard" from the TV-show The Flash and he has also appeared in the popular TV-series Supernatural. He recently released a feature film that he wrote, directed, produced and starred in, and he is also part of the new TV-series Timeless and The Deep. Apart from that, this busy man will also be in the highly anticipated War for the Planet of the Apes. Filmtopp has talked about all of this and more with the Canadian multi-talent Chad Rook.

Your movie, The Perfect Pickup, recently premiered in Vancouver. Can you tell us about it?

– It's a comedy about four guys trying to find the perfect way to pick up women in the dating world. I started out in comedy, doing stand-up and sketch comedy, but my acting career has mainly been driven forward by my darker roles. I wanted to get back to comedy.

– Adam is a normal guy, who's thrown into crazy situations surrounded by odd-ball characters. That resembles my life, I often find myself in situations where I just want to shake my head and laugh, like "is this really happening right now?". It was great to act with crazy characters like Corey (Nathan Witte) and Greg (Derek Gilroy).

According to Chad, the biggest challenge with independent film is to keep it within budget.

– Time is often limited on each location and you have to get all the shots and scenes done in time. Sometimes we were filming 24 hours a day. Independent filmmaking really shows who wants to make movies for the rest of their lives, bigger budget movies aren't as demanding. When you star, direct and lead you team, it gets difficult at times, especially when you're pushing 24 hour days.

Seen to all the roles you had in making this movie, you had a lot of control in what direction the movie would take. How do you think that the final product correspond with your original vision?

– The end result is very close. I did all my own story boarding for the film and Frederik Füssel, the Director of Photography, and I made sure to follow them closely. We had great comedic actors, which lead to some improvisation. I actually believe that the end result was better than what we had planned. 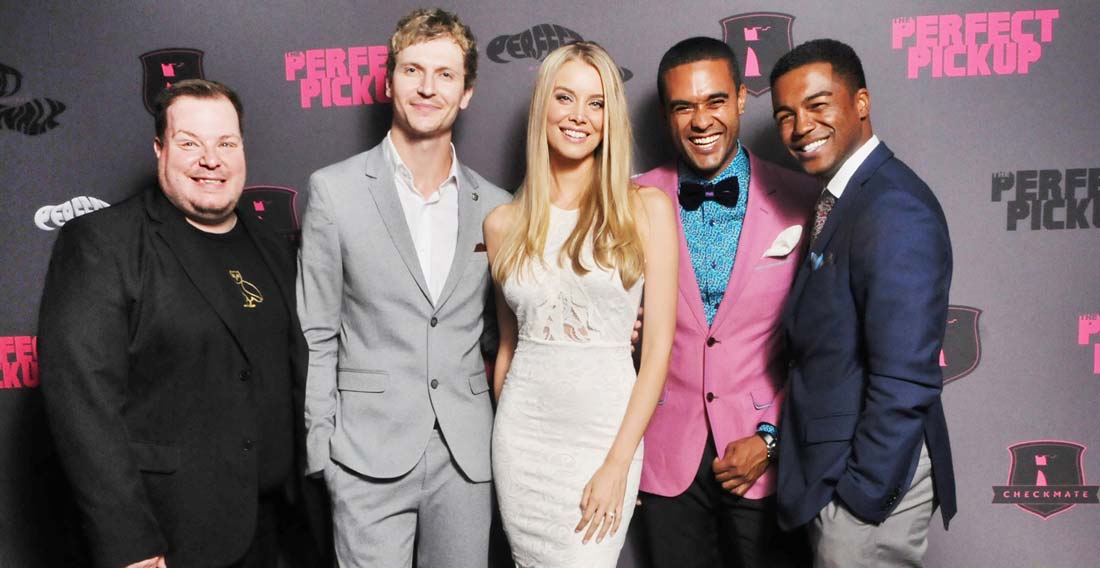 Chad has a new feature film in pre-production, Walk the Walk. A comedy about speed walking, where they wanted to take something that already looks funny and add more comedy to it. Filming will take place in Canada this year.
– It's gonna be a lot of fun to try a more clean type of comedy with over-the-top characters. Even though I wrote the script for The Perfect Pickup by myself, I worked on the story with others. Walk the Walk is completely my own idea. The film also has a bigger budget and a bigger production team, so I can focus more on the story.

To say that Chad's schedule is packed is an understatement. Beside his own projects, he is also going to be part of the movie War for the Planet of the Apes that will be released next year.

– I constantly had to leave set of The Perfect Pickup to audition for Planet of the Apes. It's kind of weird when the assistant director have to take over because the director have to audition for other projects. They originally auditioned me for an ape-role, they took me to ape-school to learn how to walk and talk like an ape. Then they asked me to read for one of the bigger male human-roles.

– After a few more auditions and meetings with casting I finally got the part of Boyle, who is second in command to Woody Harrelsons character in the film. Needless to say, Boyle is not a very nice guy, one I think you'll love to hate. It's a good role and it's the climax of the Caesar-story. They've had "rise" and "dawn" and now it's "war".

INTERVIEW: David Harbour – About the second season of 'Stranger Things'

How was it to act with Woody Harrelson?

– Woody Harrelson is exactly like you think he is. Funny and loving, a kind of old school hippie dude that doesn't answer his own cellphone. Very professional, but always having fun on set. To work with him and Andy Serkis, who plays Caesar in the movie, is one of the most rewarding experiences I've had as an actor. It was also unbelievable to see all the ape-actors. To be able to know exactly who's an orangutang, gorilla or an ape, just by the way they're moving – incredible. It's going to be an epic film.

Although Chad often plays villains and bad guys, he's not afraid of getting typecast.

– The funnest part about playing bad guys is that they're always completely different characters. One day you're the leader of a gang, next day you're a vampire. I didn't start acting to play myself. I want to jump into a whole different world. If you'd ask me to choose between the bad guy and the good guy, I'd always pick the bad guy. I'm probably driving my agent crazy because he gets me auditions and I just write back "Nah, this one's not for me, man. It's too boring." I want a certain quality of roles, not quantity. How can you complain about playing a super villain against the Flash, right?

You've won an award for singing. Is that something you're going to explore more in the future?

– I'm petrified of singing. I can act in front of a million people but if you ask me to sing karaoke I'll start shaking. When I started my career as a model I was in a big talent convention, "Faces West", where models and actors competed against each other while agents judged them. I felt ballsy and entered all the competitions. One of them were singing, which sort of tells you how much competition it must have been for me to win.

Chad adds that after his coming movie Walk the Walk he has a couple of christmas films and you can also catch him in the coming feature film Devil, Devil, Devil. If you'd like to follow Chad and his career(s) you can do so on Facebook, Twitter, Instagram or chadrook.com.